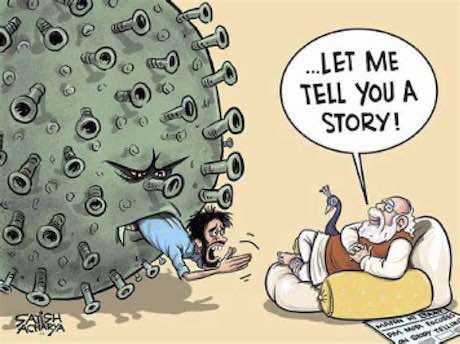 AS THE YEAR ENDS, friends have been asking me what my thoughts are on. Let me tell you a story, even as a third year of Corona virus looms this winter. It is a warm tale for a dark winter night, when no hope glimmers. The story of what happened some twenty years ago, and what can happen again.

As the results of Delhi’s municipal elections and the assembly elections in Gujarat and Haryana are out, my thoughts, frankly have been on India’s oldest national party, and you may ask me why? One of the reasons is the defining image of Rahul Gandhi speaking in rain-drenched Karnataka, and all the short but important points he has been making in his 3,500km yatra. If one follows the visual trail, one can see the subtle change in the persona of this man; now he comes across as a steadfast leader. And his prestige no doubt has increased with all the glamourous support he has received.

Of course, the flamboyant Congress MP, Shashi Tharoor was beside him in Palakkad. There is, however, the most memorable image of youth leader Aaditya Thackeray beside Rahul Gandhi, that has set the young thinking. Pooja Bhatt, yes, but Ria Sen and Swara Bhaskar are again youth icons. Mehbooba Mufti is an important participant but CPM’s M Tarigami’s gesture is what needs to be emulated by all parties wanting to keep the Bharatiya Janata Party from power in 2024. Economist Raghuram Rajan has added weight to the Congress campaign by sending out the message, Come... Support the Congress.

As the new year begins, one must not forget that just one year remains for the next parliamentary polls. The time for divisive Kejriwal-type politics has no place in this very specific battle and everyone needs to understand that data must guide the political strategy of every party, if a non-BJP dispensation has to interrupt the BJP’s next seventy-years ambition. Let us briefly look at what 2022 told us.

First the local body polls. In Delhi, the ruling party at the Centre merged all the three municipalities, hoping to beef up its six packs. They also ensured, scams and court cases impeded the political functioning of the AAP government ministers, especially Manish Sisodia. Arvind Kejriwal’s Aam Aadmi Party, however, gave the BJP a drubbing — 133 seats out of 250. Is AAP’s victory good for the Congress, as Kejriwal’s recent views are as saffron as it can get. And then out of the 10 Congress councilors who won, three have defected to AAP and increased AAP’s hold to 136 councilors. For the non- BJP polity, however, at the State-level, anyone keeping the BJP out is a friend — as they say, an enemy’s enemy is a friend.

For the Congress, with the AAP on its own short-sighted ego-trip and raiding Congress councilors, 10 councilors have not been a bad showing. Ideally, Delhi should have been like the Tamil Nadu municipality polls — Congress partner DMK won largely in most towns and villages. AAP and Congress should have had that kind of understanding to keep the BJP at bay at the municipality level, bringing the BJP to less than a 100 councilors after its 15-year stint. In BJP fort Madhya Pradesh, AAP and the INC dented the BJP bastion in municipality polls. In both, the Manipur and Mizoram municipality polls, the INC has kept a foothold.

In Manipur (BJP ruled-32/60) and Mizoram (MNF ruled- 28/40 ) too, the Congress did well. In the Mizoram assembly, the BJP has one seat and Congress has 5 — that’s good; the State goes to assembly polls in 2023. In the Manipur legislative assembly that saw elections in the summer of 2022, the BJP has 37 seats and INC 5.

Now let us look at the other assembly contests in 2022. In Bihar, there were two byelections where both seats went to the BJP from Tejashwi Yadav’s RJD. Over-confidence is something that will have no place in politics before 2024. This is an alarm bell that the RJD leadership should heed and perhaps do what Aaditya did. Will the Congress and RJD be able to cash in on the political chessboard where Nitish Kumar is no longer with the BJP?

The BJP remained entrenched only in its bastions Gujarat, UP and Uttarakhand — and that was to be expected. In Gujarat, 17 MLAs is not bad performance at all for the INC in a house of 182 seats. Even in UP, it has 2 MLAs. In BJP dominated Uttarakhand, INC holds 19 MLAs and is in a position to give battle to the saffron league. In Haryana, Congress holds 30 of the 90 seats, one third — a lot of potential here to increase Congress seats in parliament here in the next one year.

The State that goes to polls in the summer of 2023 is Karnataka. At present Congress holds 72 seats in a house of 224; again, possibilities exist to wrest it from the BJP. Since 2018, the BJP leaders at the helm of the party in Karnataka have been scam swamped. The latest scandal to hit the ruling party is the allegations made by the Karnataka State Contractors Association, which claimed that 40 per cent of the tender amounts for State-funded infrastructural projects is being taken as a bribe by BJP leaders and officials. Posters titled, ‘PayCM’ with chief minister Basavaraj Bommai’s photograph had surfaced in parts of Bengaluru in November, designed to look like the electronic wallet, Paytm; the chief minister’s face figures in the middle of a QR code with a message that reads, ‘40 percent accepted here’. This, perhaps is a cue to the INC on how to take Karnataka. Through such posters against the BJP leadership. The Deccan would then be somewhat orange-less. 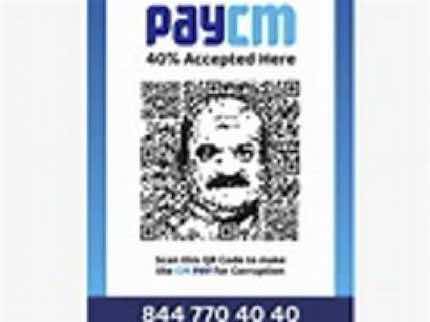 As the new year arrives, one would think, the Congress definitely has possibilities. In Jayshree M Sundar’s book, Don’t Forget 2004: Advertising secrets of an impossible Election Victory, Congress stalwart Jairam Ramesh writes in his foreword: In 2003, ‘The Congress was not expected to emerge as the single largest party’. The book was published earlier in 2022, almost eighteen years after the Manmohan Singh government came to power in 2004. If anything could be called hindsight, this is one.

As an incumbent party, in 2014, the Congress did not strategise in a similar manner, it appeared to be too overwhelmed by the ‘created’ corruption charges. But that does not mean, it cannot again. Ramesh writes, ‘the Congress had been out of power for a decade (1996-2004 with A B Vajpayee of the BJP as PM from 1997 to 2004). The Congress had every disadvantage imaginable’. The situation is the same now.

‘It was up against a Prime-Minister who was generally well liked and well regarded. It faced a party that had been in a campaign mode for almost a year prior to the polls. The media had decided that Vajpayee would return to office.’ A decade later, the PM is a Vishwaguru, not very well-liked though, nor much respected.

The BJP has been in campaign mode for the last five years and the media has decided Narendra Modi will get a third term. In 2004, the Congress won. ‘Hubris and over-confidence on part of the BJP certainly played a role.... But to my mind, the Congress’ political strategy of seeing the national election as an aggregation of State-level elections and having the right alliances with regional parties proved to be the decisive factor’, says Jairam Ramesh. This insight from within the party still holds good, as is obvious from the municipality and assembly poll results across the nation in 2022.

Jayshree Sundar is from the advertising world. She headed the Leo Burnett’s Delhi office then. She and her team, for some months before May 2004, became ‘part and parcel’ of the Congress publicity ‘war room’. Salman Khurshid and Jairam Ramesh interacted with her and her team on a daily basis. ‘The consumer research and insights presented by them formed the basis of a formidable creative strategy. Her narrative is a valuable contribution to understanding how one of the most stunning upsets in recent Indian political history was engineered’, adds Ramesh.

The first question is, can something like 2004 be done again? Yes, it can, possibly. This has to be carefully engineered. The Congress would need a ‘formidable creative strategy’.

Now, it is a given that the same strategy cannot be repeated. Because BJP leaders have admitted in several conversations that their party has ‘studied’ the 2004 Congress campaign ‘threadbare’. One can see, they have taken away several lessons. One, use of professional advertising agencies and promo-campaigns. And they have mastered brand promotion techniques. For example, one might want to know why people’s personal mobiles receive messages to visit the Pradhan Mantri Museum, when this is not done for even the national museum. The BJP’s brand is the PM. These PR lessons are learnt from the INC and refined to perfection.

To get anywhere close to this ‘stunning upset’ of 2004, a strategy has to be dreamt up and kept covert. One of the caveats for the 2004 operation was its secrecy, which took the media as well as the opposition by surprise. The brainstorming was secret, the masterminds of strategy were secret, the field studies were secret, the launchpads were secret as was the plan. The photographs were secret, so were the legends as were the creatives.

Given the assignment to create a miracle for India’s old political party, and a slender deadline, Sundar told her team, ‘Let’s treat INC as the company that has the brand Congress party’ and she decided to treat the operation as any ad company would treat any other of its FMCG, Durables, Services clients.

‘...Brand Equity blocks of Salience, Relevance and Differentiation will have to be applied to build Brand Resonance or the point where the consumer embraces the brand...’ Here Brand Congress was wooing client the Voter.

The Vajpayee-led party’s India Shining slogan led to asking, ‘shining for whom?’ Not for you and me. Not for the aamaadmi. It was an elitist legend. This gave opportunity for the creative: Congress ka haath, aam admi ke saath. The original slogan, with aam aadmi, was first a Congress tool refurbished by Kejriwal in 2014.

So, is it possible for the Congress to reclaim the aam aadmi slogan?

Speaking at book events Sundar has repeatedly said, ‘I believe it’s a story that had to be told and from various perspectives. Living and working on one of the greatest case studies in India and not telling the story would have been a disservice to the profession. If you love history and politics then this is a story for you’.

The story of dismantling an entrenched political entity, of course, is best told by cartoonists and comedians. Remember, Charlie Chaplin and Hitler? Nearly 400 sedition cases have been filed in India since 2014, including against a hundred journalists and a dozen cartoonists and comedians. It is artists like Satish Acharya, who in his book, Go Corona, Go, tells us the best way to deflate such pompus balloons and crafted slogans. What the Congress needs to do to draw the attention of the Common Man is tell the story of the Common Man vs the BJP’s Brand. 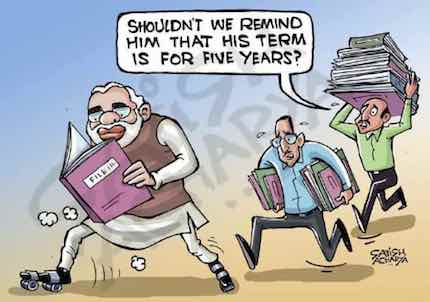 Satish Acharya Cartoon: ’Should’nt we remind him that his term is five years’