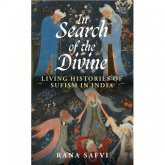 In Search of the Divine:

Living Histories of Sufism in India

Orthodox Muslims may look down upon Sufism as blasphemy but writer-scholar Rana Safvi asserts that Prophet Muhammud was the first Sufi and the first link of all Sufi orders or silsilas.

In a claim that could raise the hackles of many Muslims, Safvi says that it is from the Prophet’s own behaviour that Sufis learn ihsan or doing all things beautiful, a principle on which they lay great emphasis. “Sufis believe that though the word ‘Sufi’ itself came up centuries later, in essence, Prophet Muhammad was the first Sufi.”

Placing her reasoning in a historical context, she says the Prophet preached spirituality and mysticism but these were lost in the new religion’s expansionist phase. As the esoteric teachings of the Quran and hadiths dropped out, Allah’s wrath took precedence. The simplicity and brotherhood gave way to power struggles and intrigues after the Prophet, forcing some Muslims to go back to the basics of Islam. A set of ascetic and renunciative practices rose and began to flourish, ultimately leading to Sufism.

This potentially controversial bit apart, the book is a comprehensive and eminently readable account of India’s rich Sufi history, the prominent and not-so-major shrines or dargahs in the country and the reasons why an order that is clearly Islamic has attracted and continues to pull people of all faiths and religions even in these troubled times.

Sufism was introduced in south India in the eighth/ninth centuries by early Muslim traders and navigators. But it took firmer roots in north India as the Delhi Sultanate offered an oasis of peace, prosperity and learning when Mongol hordes were destroying much of Central Asia. As mystics fled the troubled region and settled in the Indian subcontinent, they drew from local Hindu influences — including incense sticks and lamps — and developed a unique form of Sufism.

Although there are broadly five Sufi streams in India, the most popular is the Chishti order whose sama mehfils (musical assemblies) — popularized by qawwalis — create the momentum to lead to a state of trance. This is, however, anathema to many Muslims. The Chishtis, whose early votaries came in contact with Hindu yogis, also indulge in difficult ascetic practices and fast almost continuously. It is not surprising that emperor Akbar, who believed in universal peace, a concept that died with him, liked the Chishtis’ language of pluralism.

It is but logical that the most frequented dargah in India is of Khwaja Muinuddin Chishti or the Garib Nawaz in Ajmer whose spiritual insights and illuminating discourses drew thousands. The other popular Chishti dargah lies in New Delhi’s Nizamuddin area, dedicated to Hazrat Nizamuddin Auliya, who sent out 700 disciples to set up shrines in other parts of the country. Both have always attracted — and still do — people of every faith and religion.

So, how did Sufi masters, despite being seeped in Islam, manage to attract such large numbers from other religions, in particular Hinduism?

According to Safvi, Sufism emphasis on the interior path of mystical love and knowledge of God was a major magnet. (This was also the path of Hindu sages.) With their emphasis on eternal truth, beauty and goodness, Sufi masters preached love of humanity and led a life devoted to the service of the people, irrespective of class, caste or creed. Many Sufi saints also avoided the wealthy and even the royalty but welcomed ordinary folks. Sufi masters were never judgmental. The idea of communal dining was a great attraction in a society where caste disorder has always prevailed. Sufi saints considered retribution and revenge as unholy. This was in contrast to some Muslim rulers who were hostile to Hindus. Many dargahs also celebrate non-Islamic festivals.

Many scholars see similarities between Wahdat al-Wujud, the inward experience of a Sufi, and the Advaitva Hindu philosophy. Sufism also absorbed the monastic traditions of Buddhism and Christianity and the philosophies of the Vedas and Upanishads into its discourse. There was a cross-fertilization of ideas, naturally drawing locals of all varieties. One Sufi saint in Gujarat, Imam Shah Bawa, established a unique sect called Satpanth (True Path), a blend of Hinduism and Sufism. His dargah is looked after by Kutchi Patels and the attendant in front of the shrine is a Hindu pujari.

But there were Sufis who tried to take it back to the world of Shariah, Safvi reveals. Fortunately, they were in a minority although they did do damage. After the death of Akbar, Sheikh Abdul Haqq who was from the Qadiri order (which opposes music in general and instrumental music in particular) of Sufism turned against the emperor’s policy of universal peace and urged the Mughal court to turn towards the shariah. More than him, however, it was Sheikh Ahmad Sirhindi of the Naqshbandi silsila (which lays emphasis on silent glorification of God with breath control and meditation) whose influence led to Aurangazeb’s most severe treatment of Hindus. Once Sirhindi and his movement were introduced, Akbar’s religious cosmopolitism was abandoned by Jahangir; Jahangir’s indifference to religion was given up by Shahjahan; and Shahjahan’s attempt to keep personal religious ideas out of politics was ignored by Aurangazeb.

Ironically, one of Sirhindi’s spiritual descendants, Mirza Mazhar Jan-e-Jaman, did a U-turn and vociferously rebutted the views of the orthodoxy regarding Hindu scriptures. He declared the Vedas to be a revealed Book, and described Krishna and Rama as prophets or messengers. Other Sufi saints also translated Sanskrit texts.

Notwithstanding the opposition from the ulema and, of late, Hindutva activists, Sufi shrines — some big, many small and many just roadside graves — are a living testimony of India’s age-old secular fabric. While it has held on in this diverse country, Safvi talks about a resurgence in popular interest globally.

As long as the major blessing attached to a dargah is seen as the power of the saint’s body to grant boons and remove the effects of the evil eye and possessions, people from all classes and faiths will keep flocking to the shrines. The author visited numerous dargahs in her decade long Sufi journey, and found most to be oasis of peace and spiritual serenity. The caretaker of a small dargah at Mehrauli (Delhi) even turned out to be a Sripal Yadav. And in another dargah nearby, a Sikh businessman would sit at the entrance on all important days and polish devotees’ shoes. The Mahim dargah in Mumbai is considered the patron saint of Mumbai Police; whenever urs takes place, the police present the first chaddar.

Of course, there were shrines where caretakers and vendors appeared only interested in making money from visitors. Safvi’s biggest grouse is against dargahs which prohibit women from entering, fearing they will “pollute” it. This bar, in a land which also produced many women Sufi saints, must go.

What the author does not mention is that despite the Hindutva opposition, Sufi shrines in India don’t encounter the kind of physical threats they face in Pakistan from Islamic hardliners. One reason could be the ingrained faith in the dargahs many Hindus have. Even in Kerala, where the Hindu rightwing has tried to whip up passions over the Sabarimala shrine, it will be near impossible for anyone to openly oppose the traditional practice of Ayyappa devotees circumambulating the Vavar Palli mosque (not a dargah though) in Kottayam and the Arthunkal St Andrew’s Basilica in Alappuzha.

The book would have been richer if it had photographs of some Sufi saints (if available) and leading dargahs as well as a map of India marking the major shrines.