Home > 2022 > Why Are Government Schools Dwindling in Haryana? | SS Sangwan

Why Are Government Schools Dwindling in Haryana? | SS Sangwan

Introduction to the Problem

It has been brought out by various surveys and studies that the students of private school have higher test scores than those of government school (UNESCO, 2022; Goyal S., 2009; Fench and Kingdon, 2010; Murlidharan, 2013; Singh, 2015 and Kumar and Kumar, 2021). Besides, private schools provide better environment of security, co-curricular activities, programmes for admission in higher institutions and job placement. Hence, private schools are the first choice for all parents (Kumar and Kumar 2020) and as per Global Education Monitoring Report 2022; 86 % children of even poor people are enrolled in private schools. During 2010-11 to 2015-16, the enrolment in Govt Schools across 20 Indian States fell by 13 Million while private schools acquired 17.5 million new students; in fact longer term abandonment trend is visible from 2005 as per DISE data of government schools (Kingdon, 2017).

Increasing the outreach of government schools (GSs) has always been an agenda of State governments but the issue of their quality was relegated to background after well-off families of leaders, businessmen, and service persons including teachers have adopted private schools as the normal mode of study for their children. Education Policies and legislations were ignoring this trend but the new state government of Delhi in 2014, has made quality of government schools a as their political plank. Due to focused attention of the State in the last 7 years, Delhi GSs outperformed private schools in 2020-21 with a 90.68 pass percentage against 88.35 percent in the private institutions. Now the quality of government schools is emerging as an election agenda in State elections especially around Delhi.

Shortage of teachers, poor transfer policies, lackluster monitoring and dominance of students of deprived parents are cited as main reasons for poor quality of teaching in GSs. In this regard, as many as 12 state governments have tried to implement the policy of school ‘Closures and Mergers’ after its initiation in 2013 by Govt. of Gujarat (Rao et al, 2017). It resulted in closer/mergers of 80647 schools. But its implementation was counterproductive for disadvantageous groups living in seclusion and remote areas (op cit). Government of Haryana (GOH) has also adopted this policy of rationalizing the number of its schools in 2022(Siwatch, IE). As per the policy, First, 105 High & Senior Secondary schools (HSSS) with 25 or less students in classes 9 to 12 and and Middle schools with 20 or less students in classes 6-8 are being merged with nearby GSs within 3 km. Secondly, schools of different grades/Girls within one km and in the same building will be merged in making a single unit with one head only. Separate girls’ schools are being merged with nearby co-education schools and all new schools will be opened as co-education schools only. This policy of merger will free large number of teachers and a lot of government infrastructure. However, the policy of merger has not gone down well with opposition parties and teachers’ unions. Both are making usual plea that it will adversely affect the enrolment of students of poor families. Though, distance criterion of 1 to 3 km is an antidote against this objection, Teacher Unions is worried about their reduced recruitment and promotion whereas government is worried about unprecedented hike in expenditure per pupil in GSs due to reduced students per class and highly salaried teachers.

Objectives of the Paper

Broad objective of the paper is to critically comment on the rationality of State’s merger policy of Government schools in Haryana. To peep into the genesis of the problem, the historical trend of number of different categories of schools viz., HSS, Middle, Primary and Girls is examined to reveal fallacy of policy. The present status enrolment of students in different  type of schools vis-à-vis their share in number of schools is worked to highlight need of closures/mergers of government schools. Further, social category-wise enrolment is analyzed to explain main reasons for deteriorating quality of teaching in the government schools.

The number of schools of different grades by type of management was taken from the website of Ministry of Education GOI which were latest for the year 2021-22. The number of school for historical trend in Haryana was collected from Statistical Abstracts of Haryana, 2019-20 and earlier. The Abstract also gave data of government, non-govt and girls’ schools. But the number of students enrolled and teachers are combined for all management schools in the Abstract. It may be perhaps to disguise the shortage of students and teachers in government schools. However, the students’ enrolment by social categories and schools of different managements was available from the Website of the Department of School, Education GOH. It was available district-wise for classes1 to 12 which was aggregated for Primary, middle and high and Senior Secondary schools classes at State level.

There are three broad categories schools viz., Primary including pre-primary & Balwary (classs 1 to 5), Middle (6-8) and high (9-10) /Senior Secondary (11-12) schools. All these schools are managed by State government, Local Governments, Trust/Societies with aid from government and privately without any aid. There are Central schools too in some places. We have clubbed schools of State/Centre and local governments’ and aided ones as government schools and those without any aid as private ones. The number of government and private schools for broad categories of classes is given in Table-1 for Haryana and its neighboring States. The data is taken from the Report of Unified District Information System for Education (UDISE), 2021-22(GOI).

Table 1 (last row) shows that government schools at all India levels in 2010-11 account for about 85, 67 and 55 % of the Primary, Middle and High & Higher Secondary(HHS) schools, respectively. Among 6 northern States, Haryana, shares of these Govt. schools are 89, 45, and 40 per cent, respectively. Among the neighbouring States; Haryana has a lower share of GSs except for the middle schools. It indicates that the increase in private schools of middle and HHSs is higher in Haryana compared to its neighbouring States except for Delhi. Overall, private schools have the maximum share in Delhi followed by Haryana and Punjab while HP and J & K have the minimum share of private schools. The higher private schools (PSs) in Delhi, Haryana and Punjab may be due to urban areas around Delhi, Gurugram and Chandigarh. Urban people may have a higher capacity to pay the higher fees of private schools. However, to comment on the policy of closing /merging GSs in Haryana, their long-term trend is analyzed ahead.

The Trend in Government Schools in Haryana

Haryana become a separate state from Punjab in 1966 and the number of schools since its origin is given in Table -2 to bring out the policy- focus of its various governments. 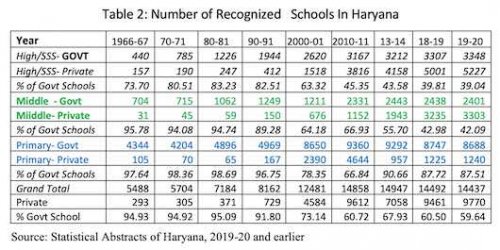 The trends from Table 2 are discussed for the different categories of schools as well all taken together. In total schools, the share of government schools has continuously dwindled from about 94 % in 1966-67 to 92 % in 1990-91, 73 % in 2000-01and 60% in 2010-11 and thereafter. The trend is depicted in Figure 4 which indicates the steepest increase in private schools from 1990 to 2000. The trends in different categories are discussed below.

Rows 2nd and 3rd of Table 2 show that both government and private HSS schools have continuously increased till 1990-91 but thereafter, the increase in the private schools is much higher. The govt. schools in this category accounted for about 74 % in 1966-67, 83 % in 1990-91, 63 % in 2000-01 and then continuously declined to 39 per cent in 2019-20. The trend is depicted in figure-1 too. The increase in both govt. and private HSS schools were the steepest during 1990-2010 but it was much higher in later. Thereafter, the GSs were almost stagnant while increase in private schools continued. Besides during 1990-91 to 2000-01, the number of girls’ schools had more than doubled (Table-3) as depicted in Figure-4. Thus, the period 1990-91 to 2010-11 witnessed an aggressive increase in separate girls’ schools without corresponding increases in teachers and other facilities. It may be a termed as a regressive step in the 1990s.

Rows 4th and 5th in Table 2 show that number of govt. middle schools dominated till 2013-14 but the private schools surpassed them thereafter. The increase in both types of schools was the steepest during 1990-91 to 2010-11 but thereafter, the increase in govt. school moderated. It may be largely due to the opening of more girls’ schools as depicted in figure 4. 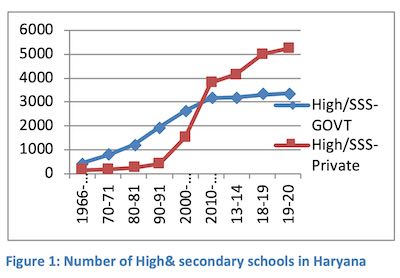 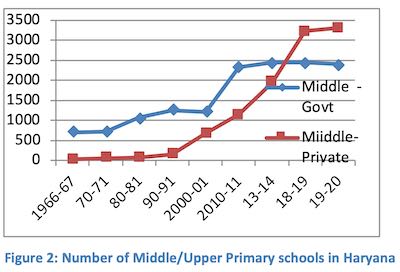 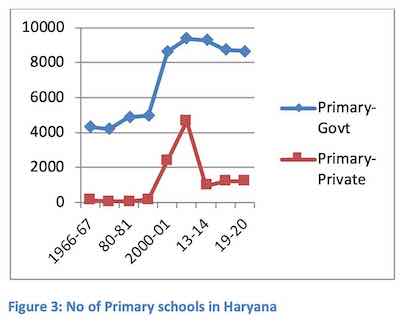 Figure 3: No of Primary schools in Haryana 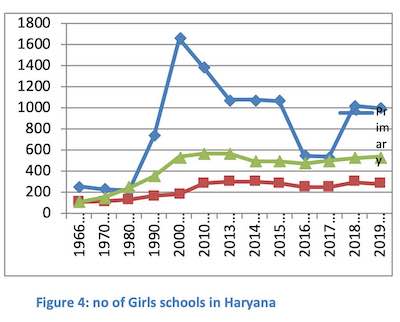 Figure 4: no of Girls schools in Haryana

Table 4: Distribution of Students of all classes by Management & Social Category

Source: Dept. of School Education Haryana, Status as on 1 November 2021

Table 4 shows that of the students in Government schools of all classes are 49.26 % as against about 60 % of their numbers. Whereas, students in private schools are 49.39 % as against 40 % their numbers. The remaining less than 2 % of students are in the govt aided schools. Social category-wise, shares of General, SC and OBC students are 28, 80 and 60 % in government schools and the remaining 72, 20 and 40 % of students of these respective social categories are in private and aided schools. Thus, the Govt. schools are the schools of the poor. Moreover, class-wise students’ enrolment is continuously decreasing and hence increasing cost per pupil. As the necessity of closing/merging is reported more about primary and middle schools, hence the situation in different category schools is discussed ahead.

The student enrolment in government HSS Schools is 51.44 % as against their 39.04 % numbers. Most of the HSS schools have a reasonable number of students and only two high schools were reported with less than10 students with nearby schools within 3 km (Tribune, 18 August 2022). In this category of schools; General, SC and OBC students are about 30, 83 and 60 % while their respective share in private schools is about 68, 15, and 38 %. The remaining about 2 % of students are in govt aided schools (Table 5).

The students’ enrolment in primary school by management and social categories is given in Table 7 as on 1 November 2021.

The students in primary Govt-schools are about 50 % as against their number of about 88 %. Social category wise, share of General, SC and OBC in govt-primary schools is about 30, 79 and 63 %. Thus in this category too, most of the students are from poor families. The average number of students per Primary school works out to 129 and it is reported that 1016 of them have less than 25students (Ajay Kumar, 2020).

To sum up, the following conclusions are thrown up by the analysis of schools of different grades and enrolment students by social categories in Haryana.

First, the private schools have overtaken the government schools around the year 2010-11except the primary ones. Student enrolment is also higher in private schools than in the govt-schools in 2021. The enrollment per class in most of govt. schools is so low that it is unviable to provide an adequate number of teachers. The above situation of dwindling number of students in govt-schools especially at primary level may have compelled the state government to bring the policy of merger & closure. It will be mainly applicable to primary schools where giving transport facility may be considered. Second, placing all schools within one km under one head, merging middle and primary schools with less than 25 students and aligning girls’ schools with nearby co-education schools may free a large number of teachers and infrastructure. Teacher- Unions may oppose the policy but it does not appear against the interest of students.

However, the merger/closer policy alone will not succeed in improving the quality of education which is a prime concern. In this regard, the government has to improve the monitoring policy with an incentive for good-performing teachers and schools. These incentives can be sponsoring teachers’ training along with exposure visits to good schools in India and abroad. It is good to involve district officers in monitoring the learning enhancement in GSs. But its success may be apprehensive until better off parents including Govt- employees/ teachers may be motivated to send their children to govt. schools by giving grace marks for admission to higher institutes and selection in government services.