The nuclear disaster at Fukushima, Japan, has placed the integrity of nuclear power establish-ments and their claims of nuclear power being safe-cheap-clean under public scrutiny. The Fukushima disaster has exceeded the grim expectations of nuclear power objectors. The accidents at Windscale (UK, 1957), Three Mile Island (USA, 1979) and Chernobyl (USSR, 1986)— all happened without earthquake or tsunami and involved only one nuclear reactor. But Fukushima, on March 12, 2011, saw four reactors simultaneously damaged. Incidentally, the hardly-ever-referred-to Windscale reactor was shutdown in 1957 following an accident, but is not scheduled for decommissioning until 2037, leading to suspicion that nuclear scientists, unclear how to decommission it or what are the costs involved, are passing the buck to future generations. [ http://en.wikipedia.org/wiki/Windscale_fire, accessed on 25.3.2011]

The Fukushima nuclear disaster demonstrates that unanticipated combinations of events leading to disaster are inevitable in any complex system like a nuclear power plant (NPP). Charles Perrow, in his book, Normal Accidents: Living with high-risk technologies, writes:1 [A nuclear reactor] is a complex technological system. All such complex systems exhibit interactive complexity (sub-systems interact in unexpected ways) and tight coupling (sub-systems have rapid impact on each other). These characteristics make the system accident-prone. Such systems have serious accidents as a consequence of the inherent complexities irrespective of the intent or skill of the designers or operators. The best systems operated by the best men will fail – and fail regularly. [Emphasis added] As veteran journalist M.J. Akbar wrote about Fukushima, Nature was the trigger, not the gun. It is the NPP that is inherently dangerous, regardless of the cause for accident, be it human error, technical malfunction, design failure or material failure. Careful design and engineering, and good operator training may minimise the chances of disastrous accidents but cannot eliminate them. Today, the big question is: Howsoever small the chances of nuclear accident or contamination occurring, are its personal, social, environmental and economic, immediate and long-term effects, at all acceptable?

Nuclear establishments worldwide are secrecy-ridden, not open to questioning, and not accountable to the public. Radioactive emissions are concealed, and accidents not reported or their magnitudes downplayed, and true financial, operating and life-cycle costs not revealed— thus enabling their claim that nuclear power is safe, cheap and clean. The Indian nuclear establishment argues that while safe is not 100 per cent safe, it is like any person not being 100 per cent safe when crossing the road. Indeed. But this argument neglects the fact that possible harm to a person voluntarily crossing the road is only to him/herself, while radioactivity from a nuclear accident reaches immediate and distant communities of all living things, and their future generations, and they have no choice in the matter.

Presently only NPPs are in the public eye, but the safety and health hazards due to normal operation or accident in ancillary nuclear installations are no less important. These installations are for uranium mining, uranium enrichment, fabrication of fuel rods, re-processing spent fuel, storage of nuclear waste, and final disposal of nuclear waste. [See Figure 1] Even though there are no nuclear reactors and no fission processes in ancillary installations, each of them conduct complex technological processes, and risks of accident and contamination exist. An uranium enrichment plant (called the Rare Materials Plant or RMP) is located at Ratnahalli, just 15 kilometres from Mysore, Karnataka’s second city with a population of over one million.

Mysore’s public was agitated in the 1980s when the RMP was established, as there were rumours of it being a bomb factory. This was covered extensively in Mysore’s premier English daily, Star of Mysore. Official denials followed, claiming that it merely processed rare earths. Agitations for official transparency at the RMP were disrupted using police force, and the agitation died down. However, giving the lie to the earlier stand, it became public knowledge that it was a uranium enrichment facility even before it was published in The Hindu’s fortnightly Frontline [‘In the name of national security’ by R. Ramachandran, Volume 17, Issue 14, July 8-21, 2000; http://www.hinduonnet.com/fline/fl1714/17140890.htm ]

A uranium enrichment facility is one at which uranium hexaflouride (UF6), received from the Jaduguda (Jharkhand) uranium mines, is passed through centrifuges to concentrate U-235, the radioactive isotope of uranium, which is just 0.01 per cent in the UF6. As the U-235 component increases, it is said to get enriched. NPPs require around four per cent U-235 concentration. (Further enrichment to around 40 per cent U-235 is required for preparing a bomb.) The material from the reject stream of the enrichment process contains significant U-235, and is called depleted uranium. Enriched UF6 is chemically processed and fabricated into fuel rods for insertion in nuclear reactors of NPPs. Like any industrial process, the nuclear fuel cycle produces radioactive wastes at every stage.

The public does not expect information that may compromise national security or economic interests, or impinge on physical or technical security of the RMP. But it has a right to know how much of what wastes the RMP is producing and where and how they are stored and/or disposed off, and the safety aspects of conveyance of nuclear materials into and out of the RMP, so that public security of safety and health is not compromised.

What Risks does the RMP Pose?

There are three main risks due to the RMP. One, the RMP being a uranium enrichment plant which can enrich uranium for the NPP fuel or nuclear bombs, it is a prime target for unfriendly countries or terrorist organisations. A strike on the RMP spells extreme risk for the huge population of Mysore and surrounding areas. Two, radioactive contamination of air, surface water and ground water from handling, processing and storage of all nuclear and non-nuclear chemicals in the RMP, and Three, dangers to the public from transit of radioactive materials to and from RMP through populated areas by road, rail or air, including accident to the vehicle or containers.

Insofar as the RMP as a target for attack is concerned, short of closing down and shifting the RMP itself, there is not much that can be done except preparing post-attack disaster management plans including evacuation of populations, and regularly (annually?) rehearsing implementation in coordination with district authorities. The last two constitute the public safety and health hazards which need to be examined.

Public Health Hazard of the RMP

The RMP is located on high ground overlooking the Krishnarajasagar reservoir (KRS) on the Kaveri river. Rainfall run-off and also ground water from the Ratnahalli area eventually reaches the KRS, from which Mysore receives its drinking water supply.

The integrity of storage of nuclear and chemical wastes within the RMP premises is thus vital to the purity of Mysore’s drinking water. Storage of some of the wastes is being done in unroofed concrete-lined tanks. This has the hazard of overflow when rainwater fills the tanks, contaminating the run-off into the KRS. Also, even if there is a roof, cracks in the concrete lining will allow the contents to enter into ground water. Therefore, the RMP’s certified, periodic inspection/monitoring report(s) of the storage facilities along with the nature and quantities of contents in storage need to be made public periodically. Also, the water of the KRS needs to be periodically tested by a reliable agency independent of the nuclear establishment. Further, since there is routine contamination of air by radioactive materials, details of radio-active contamination of both water and air need to be transparently discussed as a public health issue.

Figure 1: Nuclear Fuel from Mine to NPP 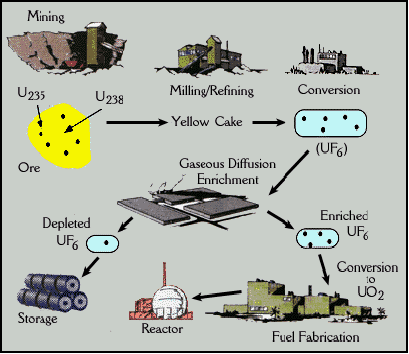 A few kilometres west of Bilikere on the south of Hunsur Road, an area with boundary fencing is marked ‘Arabithittu Game Sanctuary’. A power transformer on the roadside with power lines leading inside, industrial buildings inside, and uniformed guards at the gate were observed from the highway. A letter in Star of Mysore (July 12, 1998) titled, “Pray, tell us what’s inside ‘Arabithittu Game Sanctuary’?”, brought out that this so-called game sanctuary was being used for industrial purposes. It appears that the installation is connected with the RMP for storage or disposal of radioactive materials.

The Government of Karnataka and Government of India owe the public an explanation for clandestine use of forest land for industrial purposes, and declare the nature of its present use with respect to public safety and health.

The public is not interested in the government revealing state or industrial secrets; this is neither necessary nor desirable. But the RMP authorities should not take shelter under Section 8 (Exemption from disclosure of information) of the RTI Act, because some exceptions can be overruled when public safety and health are more important than protecting information.

The government’s assurance that the safety of India’s nuclear installations will be reviewed and the outcome communicated to the public, and that the competence of the Indian nuclear establishment is adequate to handle any nuclear accident, does not allay fears and is unacceptable.

The nuclear establishment needs to earn public confidence by undoing its reputation of excessive secrecy and self-certification through restructuring itself and becoming accountable to the public with genuine transparency. As far as Mysore’s uranium enrichment installation is concerned, the RMP authorities need to hold public hearings to answer questions concerning public safety and health.

Major General S.G. Vombatkere holds an M.E. in Civil (Structural) Engineering from the University of Poona, and Ph.D in civil structural dynamics from the IIT, Madras.