Woes of Sugarcane Economics: The Way Out? | Sher Singh Sangwan

Like the Minimum Support Price for 23 kinds of cereal, pulses, and oilseeds crops; the Government of India (GOI) has been announcing a guaranteed price for sugar cane which was called the Statutory Minimum price (SMP) till 2008-09. Since 2009-10, it is termed Fair and Remunerative Price (FRP) as per the recommendation of the Rangarajan Committee which took into account the cost of production of sugarcane as well as the sugar price realized by sugar mills. Despite FRP, some state governments announce state-advised prices (SAPs) for sugar cane which are higher than FRP. These SAPs are binding on sugar mills despite their protest as the Supreme Court has validated the SAP announcement power of the States, first in May 2004 and reiterated in 2019 too.

Since 2004, there has been a chronic problem of outstanding sugarcane arrears to farmers as the mills reported their unable to pay (Table 1). After every 3-4 years, state and central governments are allocating budgets and arrange soft bank loans for sugar mills to clear payments to farmers. The author has explained this problem to senior bankers in Mumbai (September 2016) when banks were directed to provide Rs 6000 crore soft loans. The ex-mill price of sugar has almost been stagnant whereas the SAPs of sugarcane have been inducing higher production of cane and sugar. Thus mills have been accumulating stock of sugar as they are unable to sell despite moderation of the Sugar Control Order 1966 from time to time but unable to sell or export due to their higher cost of production. The Central Government introduced the minimum sell price of sugar in 2018 for viability, on one hand, and states are announcing higher SAPs on the other hand. Thus the problem of the sugar economy is like a double-edged sword.

The genesis of the Problem

In the absence of government intervention in sugarcane price, its acreage was broadly following a four-year cyclical trend in response to prices of sugar, Gur and khan sari in the previous year. Potato is another crop whose acreage still follows the four-year cycle in the acreage. It is as per the well-established Nerlovian model of acreage supply response with lagged adjustments to prices, yield, etc. With the continuous higher SAPs of sugarcane by some states, the cyclical nature of their sugarcane acreage has been flattened with continuous upward trend in the last 15 years or so (Figure 1). Further, due to purchases at higher SAPs in mills, about 80 per cent of sugarcane is used for sugar production in 2017-18 which was about 30 percent in 1975-76. Payments as per SAP are legally protected too as Allahabad High had once ordered UP Government to recover the farmers’ arrears as government revenue from the mills. Moreover, sugarcane farmers are relatively well-off and more unionized like government employees. They have strong political lobbies too to raise their issue. That may be reason that there are SAPs for sugarcane while no such price is announced for oilseeds and pulses which are shorter supply and even grown in less irrigated area where farmers are relatively poor. Moreover, there is no cap on the area of sugarcane per farmer whereas; pulses and oilseeds are not purchased more than 25 quintals under Price support scheme. 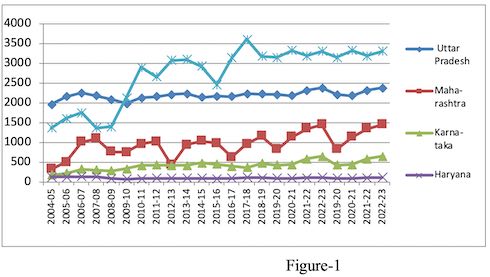 On 22 October 2009, the Sugarcane (Control) Order, 1966 was amended; the concept of Statutory Minimum Price (SMP) of sugarcane was replaced with its ’Fair and Remunerative Price (FRP)’ by the Rangarajan Committee was set up by Central Government which gave its report on 5th October 2012. As per its recommendation, 70 percent of last year’s price should be paid to farmers and 30 percent to be retained by the millers. The FRP is linked to the cost of sugarcane production, recovery of sugar, price of sugar, and its by-products. Farmers can further increase their profits by reducing the cost of production of sugarcane, whereas, millers may reduce the cost of sugar processing by cogeneration electricity from bagasse. Further, there is a provision for higher prices with higher recovery. After FRP for sugarcane since 2009-10; Tamil Nadu and Karnataka have stopped regular increases in SAP but Punjab, Haryana, Uttar Pradesh, and Uttrakhand are still intermittently announcing SAPs under the pressure of farmers’ unions. At that time of announcement states commit to pay the price above FRP but fail to pay it in time which results in arrears to sugarcane farmers.

Present Crisis and Way out

The higher SAP and yield per hectare of sugarcane in recent years have resulted in increases in its acreage and hence the sugar production is more than domestic demand. The gross and net incomes per hectare from sugarcane are much more than its competing crops. Due to higher SAP, the cost of production of our sugar is generally higher than international prices. To clear the stock with mills, GOI has to give subsidies to mills for the export of sugar. Hence, some major sugar-producing countries like Brazil, Australia, and Guatemala have filed cases under WTO Agreements against the higher support farmers in India. GOI of India is inducing mills to convert a part of sugarcane for ethanol production by fixing its higher blending in petrol (20% by 2025). Some states are also resisting the pressure of farmers’ unions to annually revise the SAPs. As an alternative to SAP, States may direct the sugar mills to distribute a portion of their overall profits from sugar, ethanol, and other by-products. Moreover, sugarcane acreage may be diverted to competing crops like maize, arhar and oilseeds to reorient land-use as per the demand of the country. The producers of oilseeds and pulses are mostly from less irrigated areas and they deserve more focus than others to reduce the import burden of the country. With higher and assured prices for oilseeds, some sugarcane acreage can also be diverted which will arrest the depletion of groundwater too. 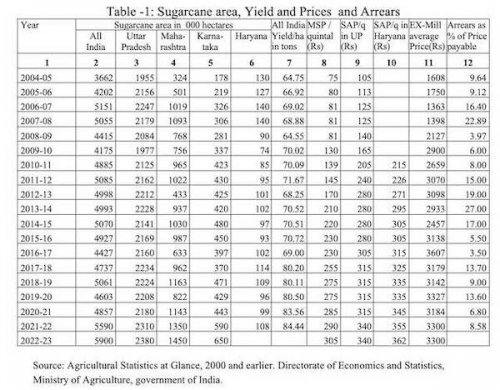