Since 26 November 2020, thousands of farmers are protesting at the boarders of Delhi State for repealing the three farm laws of 2020. An attempt is made here to link these laws with the issues thrown up by the Agricultural Price Policy (APP). The AAP is implemented through procurement of wheat & rice at MSP by Food Corporation of India (FCI) and pulses & oilseeds by National Agricultural Cooperative Marketing Federation of India Ltd (NAFED) under a Price Support Scheme (PSS). At present, we have huge stock of wheat and rice i.e. about 2-3 times of our buffer requirement, whereas, the country is still importing pulses and especially oilseeds of about Rs80000 crore per annum.

The lop-sided production may be largely attributed to biased implementation of APP for wheat and rice versus the pulses and oilseeds. To illustrate, wheat and rice are purchased by FCI at MSP without any cap on quantity for individual farmer and their overall production in a State. Whereas, the pulses and oilseeds are procured with a cap of 25 quintals per farmer and procurement limit of 25 percent on the total crop production. Further, procurement under PSS is not regular as it is allowed to a state, if the production in the year is surplus and price is likely to fall below the MSP. There is regional bias too in implementation as wheat and rice are procured 100 percent in Punjab and Haryana and a few other States have joined recently with partial purchases only; whereas, pulses and oilseeds were purchased in 12 States in 2017-18.

Moreover, States arranging FCI purchases are claiming about 4 percent of purchase-value as fee/cess and its commission agents (arhatias) are claiming 2.5 percent as commission and some expenses for cleaning, etc. While the States implementing the PSS, have to give undertaking to forego the market fee, cess, etc on the quantity to be procured by NAFED. Even the arhatias are not involved and State has to arrange for procurement at a nominal fee. The farmers of selling wheat and rice are paid within 72 hours while the growers of pulses and oilseed selling to NAFED are getting payment after 20 days or more. Owing to more benefits in the States procuring wheat & rice at MSP; some big farmers-cum-arhatias have formed strong farmers’ Unions (FUs) to bargain for waiving of quality norms and loans from banks and even compensation for farmers’ suicides.

Despite cap on quantity of individual farmers under PSS; the overall procurement since kharif 2017 is much higher than previous years. The number of benefited farmers under PSS is much more due to participation of 12 States as against wheat and rice in a few states. Moreover, the beneficiaries under PSS are from the poor States/regions with less irrigation. A study of PSS was conducted in 2018-19 by GOI for evaluation of its impact in the country. The study revealed that PSS-purchases have created awareness about MSP among all the sample farmers surveyed in eight states. It is to be noted that the awareness of MSP was just 5 to 7 percent as per NSSO 70th Round in 2012-13 and the purchases were about 2 percent only; whereas, the purchases of pulses and oilseeds had reached to 12 percent of their production in 2017-18. The study further brings out that stocking by NAFED has moderated the price increase and seasonal fluctuations. But procurement under FSS has failed to increase the market price which was one of the most important objectives of the scheme. The market prices of most the pulses and oilseeds were lower than MSPs during 2016-17 to 2019-20. In fact, our MSPs of major pulses and oilseeds have even surpassed the International Prices as per the Commodity profiles published by Directorate of Economics and Statistics (Table-1).

The most disturbing outcome of procurement at MSP was non-participation of traders, stockiest and processors in purchases at the time of harvest. The author verified in 2018 that the traders in the APMCs at Junagarh in Gujarat, at Gulbarga in Karnataka and at Surajgarh Rajasthan were just idling in the peak marketing of period of groundnut, tur and mustard, respectively. The Dal and oil millers reported that they are purchasing from the known stocks of NAFED at price below the MSP by Rs1000 to Rs2000 per quintal whereas the farmers were getting only Rs500 to Rs700 more than the market prices. In both the counts, GOI was incurring liability of about Rs2000 per quintals for the loss to NAFED during 2016 to 2019.

One of the questions unanswered so far is about the urgency to bring the marketing reforms through Ordinances on 5 June 2020 without wider discussion with the farmers. If we connect the laws with the huge loss due to procurement especially under FSS, GOI may be in hurry to involve the traders and processors in purchases during kharif of 2020. With this conviction, government may have passed the ordinances as Acts in September 2020 despite the protest by FUs in Punjab. The easing of stock-limits under Essential Commodities Act (ECA) for processors and traders may be an incentive to them for the procurement. The concept “trade area’ outside APMC without any tax/cess was direct benefit for processors by saving on arhatia commission, State tax, transport cost from APMC and loading, unloading charges, etc. But, non-mention of MSP as reference price is a strong apprehensions of the farmers that GOI may do away with MSP regime. I also wrote against the Acts in the Tribune on 28 September 2020.

But after 26 November 2020, 11 rounds of talks were held with FUs by GOI wherein the later, made several offers to address the apprehensions of the FUs about the farm-laws. First, the Centre agreed that the States may register the ‘trade areas’ and even levy taxes as per their Act to save the APMCs. Second, GOI agreed to allow States to register all the traders in the ‘trade area’ instead of any person with PAN number to address the risk of farmers. Third, to ensure prices around MSPs, GOI has clarified that the sale in trade area will be an additional option for farmers and the existing system to procure in APMCs at MSP will remain unchanged.

Some apprehensions of FUs are from the farm-agreement (FA) in one of the Acts. First, they may not be getting justice at SDM level, the final authority. But GOI argues that this provision was made to enable farmers to get justice quickly, at local level and at a low cost. Further, GOI agrees to amend the Act for enabling the farmers to approach civil courts. But I think it may not be in the interest of farmers. Second, it is feared that through FA, big corporate will take loans against farmer’s land, thus deprive him of his land.As per section 9 of FA, the sponsor (lessee) may be linked with insurance or any credit instrument of the schemes of Central or State Government or any other financial service provider, but its Section 15 clarifies; no action for recovery of any amount shall be initiated against the land of the farmer. Further, as per FA clause 8a, there will be no provision for transfer of land through sale, lease or mortgage of the land or premises of the farmer. The clause 8b of FA Act clarifies, the sponsor will not make any permanent structure or modification of land and if done with consent of farmer, it will be removed at the end of the agreement otherwise farmers will own it. Further, FUs may seek clarification that the loans will be for crop-expenses and not for any long term investment against land beyond agreement period.

The other hyped apprehension is about the removal of stock limit under ECA which may results in profiteering by corporate. But as clarified above, the millers of pulses & Oilseeds are already taking more benefit than famers by not stocking in the marketing seasons. Perhaps, GOI intends to induce such millers to purchases at their sites by saving on fees, commission, transport and other cost at APMC. It is to be noted that the arrivals in next season is one of the strong auto-checks on profiteering.

As regards the Constitutional validity of the Farm laws, GOI says that Legal advice was obtained before introducing the Acts e.g., “Under Entry 26 of the State list, subject to the provisions of Entry 33 of the Concurrent List; the State Assembly has the power to pass an Act on trade and commerce within the State. Above all, the FUs are demanding legalization of MSP by making purchase below MSP a punishable offence. The Centre agrees to give written assurance for continuation of the current procurement system at MSPs. But there is no precedent of MSP as law in India and abroad. It has been argued in a number of opinion articles that area planning is sine-qua-none to ensure MSPs for all crops (Sangwan SS in the Tribune in Oct. 2017, 2019, IE 2019 and the Mainstream November 2020). It is to be noted that participants in agitation are mostly from the areas selling wheat & rice and their FUs are not agreeable to anything less than the repeal of the Acts. It is alleged that the agitation is acquiring political colors. Keeping in view, the long agitation of farmers and stalemate in arriving at any agreement; the Supreme Court (SC) has stayed the operation of the Acts for one and half years.

Nobody can deny the farming is becoming unviable mainly due to decreasing size of holding and it may require big policy changes relating to the law of inheritance, hassle-free lease laws to take out unviable farmers from agriculture. Now, the prolonged agitation and frequent regional Kisan-Mahapanchayats by farmers along with Corona-19 are becoming detrimental to other sections of the society and farmers themselves. In view of this, the SC on 23 August indicated to Governments for evacuating the protest sites. Therefore, the FUs along with offered Amendments may also demand clarification on type of loans by the lessee and extension in the abeyance period of these Acts to pave way for ending the agitation. 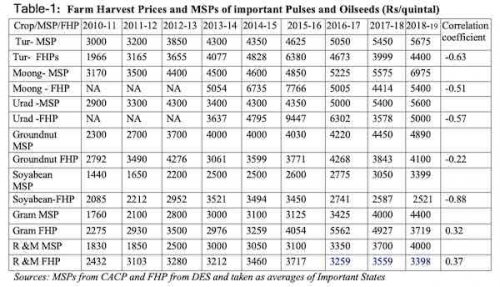 The MSP, Domestic wholesale prices and International Prices of sample pulses and Oilseeds