People build bridges to connect both sides; ironically, the politics of financing behind the Padma Bridge was a divide. Our national interests and social culture used to be promoted by intellectual groups, media and academic institutions. Their roles are fading away, and the global multinational organisations made them powerless, subservient and redundant. Moreover, some self-serving Bangladeshis- mostly in high chairs- do not care about protecting the country’s national interests.

No one can blame anyone but themselves, as some have alienated our own people and yearn for foreign dependency, which puts the country on death row regarding liberty, freedom, tradition, and culture. This is the point of view that I came to after reading the book of Professor Abul Barkat, “Padma Bridge with Own Finance: When 2012-research became visible truth in 2021” (published on 26 March 2021 Bangladesh Economic Association and Mukto Buddhi Publications). 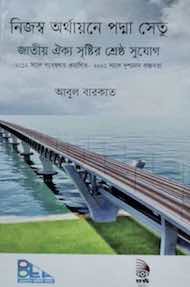 This book is eye-opening that unfolded many aspects of the Padma Bridge saga. Some irresponsible Bangladeshis- commonly known in academia as followers of neo-liberal ideology- advocated for accepting the World Bank loan with unattainable conditions (turnkey-style implementation) without realising the long-term consequences for our children, grandchildren and nation. The local lobbyists have little ‘’accurate understanding’’ of banks or organisations like the World Bank, IMF, WTO etc. How lenders using various institutions, ambassadors, local intellectuals, and bureaucrats exploit countries under the unfavourableconditions of loans. How they strip governments of power. It is a systematic game they play with the help of the locals, a financial-guerrilla war aimed at sucking assets out of a country, and assembling people at the top of the administration for a regime change, if they wish.

The dirty and ugly politics behind Padma Bridge is a familiar scenario. The bridge was supposed to be built with a loan from the World Bank, but suddenly, the local political conditions appeared unfavourable for the bank. So, a pretext of “corruption conspiracy” was used to destroy the dream of the leadership and the nation. No global financial institution can be trusted in this modern world, as their charter does not necessarily reflect their loan conditions for national development. Professor Barkat wrote that the African country, Cameron, had to pay 36% of its national budget to repay the World Bank loan, and in Kenya - 40%.

In June 2012, the National Parliament Election in Bangladesh was just around the corner. The time was critical for the World Bank to execute the loan refusal. The Prime Minister announced that the Padma Bridge would be built with national finance. Almost all the mainstream economists, persons occupying the high chair in civil society, and the political opponents thought the rejection of loan must be a suicide pill for the Prime Minister, the beginning of the end of her leadership. The local non-believers were chewing the time and waiting for the defeat of the PM. Delusions are the ingredients for regime change. In the shadows, Prime Minister Sheikh Hasina and Professor Abul Barkat fought against all odds. The PM wanted to win the upcoming National Election in 2014. Furthermore, Professor Barkat wanted to prove with scientific evidence that taking World Bank’s loan will be suicidal, and it is possible to go without World Bank. He mentioned, ‘’ withdrawal of World Bank should be seen as a blessing in disguise’’.

They were wrong; the PM had proven her leadership once again when others were in disbelief. Professor Barkat submitted a comprehensive economic analysis, and the Prime Minister’s team defined political manoeuvres. They worked tirelessly to defend national interests. It was not easy, it was unthinkable to build such a mega infrastructure without foreign currency, but they made it happen. “Never doubt that a small group of thoughtful, concerned citizens can change the world. Indeed, it is the only thing that ever has.” —Margaret Mead.

In international organisations, rarely any representative from a third world country makes a decision. All decisions for the World Bank, IMF, WTO are made outright by “Big Brother” or people in control. Even a branch manager of a bank in Bangladesh has more decision-making power. Moreover, when you return after working in any of these organisations to your home country, you will be rewarded if you campaign as a lobbyist on behalf of the “Big Brother” network. There are many NGOs or Think Tanks in most developing countries representing their interest. Though you have to ask the real question, what is morally important to you? Are you raising your children to have a future and hope?

Professor Barkat sought the clarification of how the top appointments of the Bangladesh Bank are made, whether foreign agents influence these appointments. He raised legitimate questions about bank operations, conflict of interest and the purpose of foreign agents’ ongoing presence in Bangladesh Bank (Source: On the larger canvas of society-economy-state, pages 264-265). Fifty years have passed since independence (in 1971), and we still have financial loopholes, so what are they doing here?

As I mentioned earlier, no one is to blame outside the country for the fault of our political and social system that cascades in every step in our lives and will continue where money is involved. Below some of the issues which continue to keep alive the dodgy system:

Corporate campaign finance is one of the reasons for the violation of our democratic rights. Of course, this is not a democracy where corporate funding influences the outcome of elections in favour of the super-rich. Bangladesh could improve the electoral legislation if it had the intention to represent the majority.

In addition, the qualifications of politicians need to be scrutinised. There is no point in spending taxpayer money for any politician when a person cannot understand what the laws are, is unethical and poorly educated. Moreover, there must be mutual trust-mutual respect and reciprocity in the national interests for the opposition to work together. The role of the opposition party is to ensure the accountability of the current government in congruence with the stipulations of the Constitution.

2. Students-in-politics is rarely in the national interests, and their use as political instruments causes civil unrest. However, their participation in politics was valuable when we were a colony, not anymore. If someone wants to be a social worker or political leader, they can do so outside the academic institution, working directly for a political party. Unfortunately, in Bangladesh, students’ participation in politics shows a destructive mentality.

3. Law and order in Bangladesh are stagnant due to lack of good leadership programs, staff training, auditing, and procedural guidelines. First, there is a need to ensure that those who work in the sector are adequately cared for and that the leadership is held accountable for enhancing the rule of law. Law enforcement must visibly demonstrate that no one is above the law.

4. In June 2020, the total amount of disbursed bank loans in Bangladesh was 53.23% of the GDP, of which the Private sector bagged 74.5 % and the Government 25.5 %. The central bank would not disclose what equivalent security or collateral was given by the large borrowers (super-rich) in the private sector. During the crisis, the super-rich systematically lobbies the central bank for bailouts. Consequently, the money for the rescue is collected from taxes, and ordinary people’s finances, falling into the hands of the super-rich. (Source: On the larger canvas of society-economy-state by Prof Abul Barkat, pages 184-189). It is a grey territory needed to identify loopholes and act accordingly to benefit people.

Various loopholes in financial services’ systems harm the social system. Hence, there is a need to expand electronic financial services and promote cashless transactions. Closing loopholes requires extracting daily raw financial data from various sources into databases, transforming the extracted data, and loading the transformed data into a data warehouse for further analysis and decision making. This technical process enables the government to track financial activities regularly, increase government revenues, improve financial management and empower the government. It is a technical process that is widely used in many countries. However, under a power system serving the interests of corporate syndicates, it may not be a perfect one.

The messy financial policies behind the Padma Bridge are analogies to our society. It cannot be ridiculed until we engage and empower our organic intellectual community to transform our country, committed to the principles of patriotism, commitment and responsible politics. Soon, many millions of people will cross the bridge, hoping that non-believers will understand that the bridge was not built with the money of the World Bank, although there may be many flaws in our rotten system.