by Sagnik Bagchi and Surajit Bhattacharyya*

Mr. Modi’s advocacy of ‘Vikas’ to a great extent depends on India’s strategic importance in today’s interconnected world economy and the multifarious ways to increase participation in the “Globalized Production System”. Since occupying the topmost office of the world’s largest democracy, the Modi government has announced many trade reforms. The Foreign Trade Policy (2015-21) focuses extensively on export promotion schemes, production-linked incentive schemes, and trade logistics. Post-demonetization and post-lockdown, the struggling economy was given a fiscal boost targeting the MSME and labor-intensive sectors to promote exports and increase employment opportunities. The government has also proposed most optimistically that, by integrating ‘Assemble in India’ for the world in the ‘Make in India’ program, an additional four crore jobs can be created in the labor-intensive sectors by 2025. Amidst criticisms, the Modi government pushed the dream of making India a five trilliondollar economy by 2025 through these reforms alongside the much-hyped Aatma Nirbhar Bharat Abhiyan package.

Notably, the former vice-chairman of the NITI Aayog, Prof. Arvind Panagariya, refers to today’s trade policy as ’Creeping Protectionism.’ He points out the rising tariff rates and anti-dumping duties as the major hindrances to achieving India’s robust economic growth. India’s latest anti-dumping (AD) duty was levied for five years on importing bottle-grade PET resin, used by the pharmaceutical industry, soft drinks industry, among others. The AD duty ranges from a low of USD 15.54 to as high as USD 200.66 per metric tonne. The Directorate General of Trade Remedies reports that this case was initiated by M/s IVL Dhunseri Petrochem Industries Private Ltd. and M/s Reliance Industries Ltd. Together they have a market share of 91% in domestic production.

The latest available WTO reports reveal that ever since India became a member, it has filed a record 16.9% of the total cases filed in the world and converted almost 69% of these initiations into measures (as of June 2020). The portal of DGTR reports that alone in February and March 2021, 27 (oral) hearings of AD investigations have been concluded. It is indeed true that India is the most significant initiator of anti-dumping cases in the world. The share of India’s AD initiations and measures in the world has been increasing annually by 2.21% and 1.77%, respectively. India’s average retaliation rate is about 4.61 and has risen by 2.6% annually. This is notwithstanding the fact that India’s average share of imports in the world, from 1995 to 2019, has been only around 1.6%. The five major manufacturing industry groups of Chemicals, Plastics & Rubber, Textiles, Base Metals, and Machinery & Mechanical Appliances have contributed approximately 88% of India’s AD cases for an (average) aggregate import share of 36%. Plastics & Rubber and Textiles, which had an import share of 2.7% and 1.77%, respectively, had filed more than 10% of India’s AD cases. Astonishingly, the absolute number of cases in these industry groups is so high that it is more than the total cases filed by many developed and emerging economies. The conversion rate of AD measures from AD initiations is highest for the industry group of Chemical at 75%, while the entire group’s average was at 67%.

On the other hand, these industries have faced about 90% of initiations of the total cases filed against India. In comparison, they occupy only about 46% of India’s export basket. Interestingly, Base metals with an export share of 8% in India’s export basket faced 35% of AD cases, while Textiles with the highest export share (17%) faced only 11% of AD cases. Let’s look into the industry-wise retaliation rates for AD initiations, as well as measures. The Chemical industry and Machinery & Mechanical Appliances are more retaliatory than the other industries (Fig. 1). Essentially, for every 10 initiations that these industries have faced, they have retaliated back with 78 and 68 initiations, respectively! 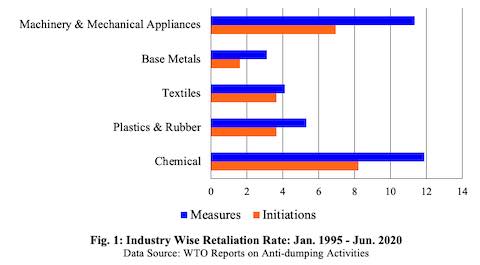 At the bilateral level, three-fourth of India’s AD initiations are targeted against only eleven countries whose average contribution to India’s import basket is 45%. It is worth mentioning here that 92% of these initiations have been converted into AD measures. A quarter of India’s total AD initiations and AD measures are filed only against China. The conversion rate is also highest against China (76%), while for the others, on average, it is around 67%. The high conversion rate in China’s case is primarily due to the high and gradually increasing India’s import basket. Though not necessarily the volume of trade flows determines the filing intensity. On the other hand, India shares one-fourth of its trade basket with the US and EU and has one of the lowest retaliation rates against them. For relatively smaller trading partners, India’s imports from Indonesia occupy 2.51% of the import basket but faces around 4.5% of India’s AD investigations, while Taipei, which has an import share of only 0.95%, faces about 7% of India’s AD investigations.

It seems that the magnitude of multilateral and bilateral trade flows has little impact on the AD activities. India’s AD activities’ retaliatory nature is very prominent, and a high percentage of AD initiations are actually converted into measures. Such a trend promotes credible threat in the form of retaliatory action, and by retaliating more, India perhaps strategically signals to its trading partner that if exports are unfair, then an AD suit will follow. At the same time, one also cannot ignore the fact that many of the initiated cases are filed by few domestic firms or a group of firms with a high domestic market share. For instance, consider the cases of Cold-Rolled flat products and Hot-Rolled flat products of alloy or non-alloy steel (2017) and Seamless tubes, pipes & hollow profiles of iron, alloy, or non-alloy steel (2016). The petitioners for all these cases had a domestic market share of more than 50% and, in some cases, more than 90%. Protection in the form of AD duty would certainly protect these large firms.

Another recent case is the concern voiced by National Committee on Textiles and Clothing earlier this year to remove the AD duty on importing Viscose Staple Fiber. Such a demand indicates an inconsistency in AD law’s practice with respect to the current Foreign Trade Policy. The petitioner, M/s Grasim Industries Ltd., is the sole producer of the good in India. NCTC argues that removing the AD duty would enable the domestic producer to have cheaper imported raw materials, which would allow them to achieve competitiveness in the Viscose Staple Fiber-based textile value chain. Acts such as these would help the Textile industry reach the Textiles Ministry’s target of becoming a USD 350 billion worth industry by 2025.

But then such a strategy to protect select few firms had been criticized way back by Adam Smith in his Wealth of Nations “... our merchants and manufacturers has extorted from the legislature, for the support of their own absurd and oppressive monopolies.” We argue that such practices of random AD filings only promote rent-seeking behaviour and are equally opposed by both free-market thinkers and conservatives.

The Trade Policy seeks to engage more SMEs and MSMEs in the GVCs as they enhance employment opportunities. If these sectors use intermediate inputs under AD duty, then their competitiveness would invariably go down. India surely wouldn’t want to have another growth phase without job creation, particularly during this ongoing pandemic crisis.

[Note: All views expressed are entirely personal and do not represent in any way the views of the institutions the authors belong to.]